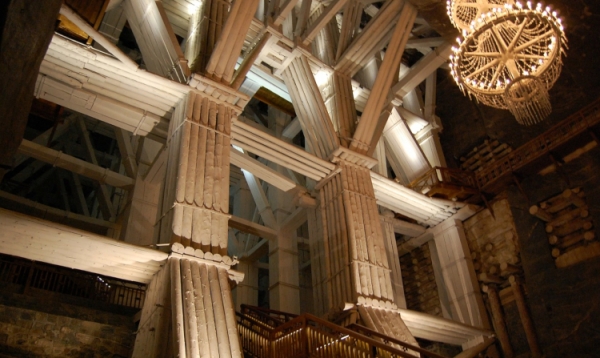 Auschwitz-Birkenau and Salt Mine

If you only have a single day available but would still like to see as much as possible, a combined tour of Auschwitz-Birkenau and Wieliczka Salt Mine might be just what you’re after. Both places are the two most attended tourist attractions near Krakow, and combining a visit to both of them in a single day will save you time and money in the long run.

Both places are official UNESCO World Cultural Heritage Sites and are an important part of Polish history. With a professional English-speaking guide and comfortable transportation, this one-day tour is a perfect choice if you’re sightseeing in Krakow and vicinity.

Auschwitz-Birkenau - how to prepare for the trip?

While a visit to a concentration camp might sound scary and stressing, that is exactly the energy you should feel from such a place. It evokes morosity and humility in visitors, becoming an almost holy place where you can honor the Holocaust casualties and pay your respects.

First of all, remember to eat breakfast and pack some food to have with you on the way. The tour of Auschwitz-Birkenau alone is a 7-hour experience, and when combined with a tour of Wieliczka Salt Mine later on, your day will be pretty cramped. It’s better to eat before the tour, though, as many tourists report being unable to stomach any food after such a drastic experience.

You can’t have bags and backpacks larger than 30x20x10cm on the museum grounds. Leave your luggage in the vehicle and keep only the most important items on you.

What’s so interesting about Wieliczka Salt Mine?

Seeing a combined tour of Auschwitz-Birkenau and Salt Mine might confuse some - what could be so interesting about a salt mine, especially after visiting a place such as Auschwitz?

Wieliczka isn’t just a regular salt mine, though - it’s a UNESCO World Cultural and Natural Heritage Site for a reason! The mine has been active for over 700 years, and the tour will take you up to 140 meters underground on a long route, full of narrow corridors and intricate chambers full of amazing art and mining equipment - all made of salt!

To make the most of your trip to Auschwitz-Birkenau and Salt Mine, go with MrShuttle. We will pick you up from your hotel between 7 and 8 AM and visit Auschwitz-Birkenau Museum and camp first, after which we’ll transfer to the Wieliczka Salt Mine. After the tour, we’ll drop you off back at your hotel at the earliest convenience, depending on road conditions.

Tweet
Published in Travel
More in this category: « Luxury, Wellbeing and Unique Hotels
back to top